Learn about the advantages of solar with battery energy storage 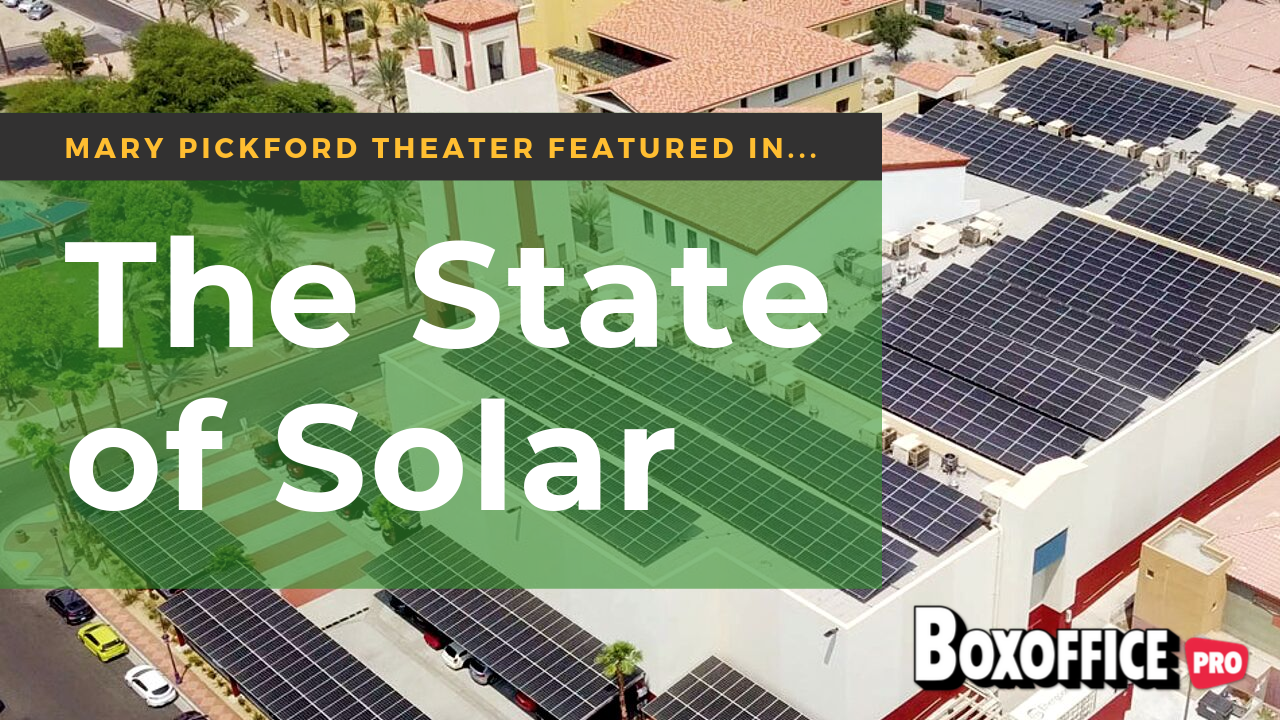 Boxoffice Magazine, the official publication of the National Association of Theater Owners, interviewed Ronald Harris for his expert insight into how theaters can improve their operational costs. In the August 2019 issue, Rebecca Pahle and Vassiliki Malouchou take a deep dive into the pioneering theaters in the country that have implemented solar energy and battery storage to manage their rising utility bills.

The Mary Pickford Theater, one of the frontrunners in the solar energy movement in the theater industry, worked with Aeterna Energy to install a customized commercial solar and battery system to offset their utility costs.

In the state of California, energy prices rise between 4 and 9 p.m., which is also coincidentally when the theaters are ramping up to serve eager moviegoers. With a solar and battery storage system, however, the Mary Pickford Theater can divert the excess energy they produce during the day and store it for later use during the peak time slot in the evening.

“Just when the theaters want to ramp up and utilize power, they would have to pay a premium rate if they’re getting that power from the utility company,” Harris explains in the article. “With energy storage, they can pull power from their own batteries during that time. What that allows you to do is take that solar power that’s being generated, and instead of pushing all the extra power onto the utility grid to use or pull back later, you’re saving the power at your own site, at your own facility, which is a huge cost saving.”

The proof is in the numbers. The Mary Pickford Theater saved $230,000 on their energy bill in the first year alone. Through intelligent predictive financial modeling software, it’s clear the theater will save close to $5 million over 21 years.

“The system is smart enough to realize, hey, we may not generate enough power from solar tomorrow, because it’s going to be cloudy, so let’s charge the batteries on the grid at midnight,” says Damon Rubio, operations manager at the Mary Pickford Theater, in the Boxoffice article.

The solar and energy storage unit Aeterna installed for the Mary Pickford Theater is the first of its kind in the country. With a 620-KW roof-mounted solar system and 1000 KW/hour of battery storage, the theater is able to effectively manage its energy expenses with pioneering technology.

In addition to the savings brought on by solar energy, Aeterna enabled the theater to lower energy expenses by installing high-efficiency A/C units, tinted windows and lights to manage energy usage.

For more information on the feature article in Boxoffice Magazine, read the details in the August 2019 issue.

For more information on Aeterna Energy’s services, contact Ronald Harris at (805) 823-3232 or click here to send him a message.

When Tax Dollars and Investor Financing Are Lost on Solar Power

With solar photovoltaic (PV) installations, however, most problems are invisible, and thus, remain unaddressed. That’s because solar panels are 100% silent.

How Much Solar Power Do You Need for Large Homes?

Using on-site batteries to store daytime solar power is becoming an increasingly popular option for many homeowners – especially those who live in larger residences.